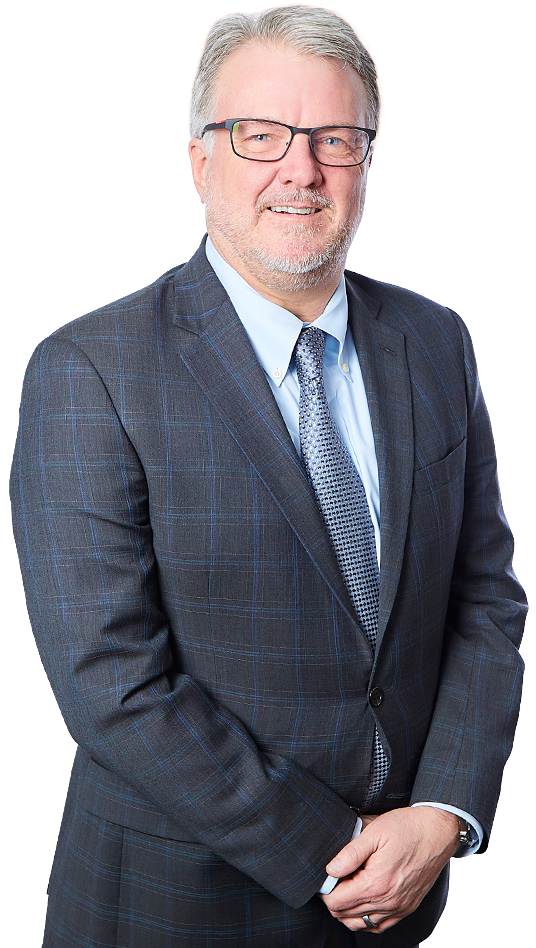 With 35 years of experience in defending health care professionals, Rodney understands the unique stresses placed on his clients and commits himself to not only defending their care but also being available to them at any hour of the day.

Rodney Sharp is a senior shareholder of Sandberg Phoenix with 35 years of experience defending physicians, hospitals and other health care providers. He has also tried premises liability, products liability and commercial cases.

Prior to joining the firm, he was Clerk to The Honorable A.G. Weber, III, Appellate Court of Illinois, Fourth District from 1985-1986 and worked at a defense firm in Belleville, Illinois for two years.

Billups v. Physician. In February of 2018, Rodney received a defense verdict in Section 1983 civil rights action against a doctor working at an Illinois correctional facility. The plaintiff, an inmate at the facility, claimed the doctor failed to provide him appropriate treatment for a nerve injury in his right hand, which resulted in permanent disfigurement and immobility to the hand. The case was tried in the United States District Court of the Southern District of Illinois.

McGill v. Physician. In June of 2016, Rodney and Dennis Harms received a defense verdict on behalf of an urologist in a case involving allegations of failure to diagnose kidney cancer. Key to the win was the retention of a world-renowned expert witness in the diagnosis in management of kidney cancer.

Lunn v. Hospital. In July of 2015, Rodney received a defense verdict in this wrongful death medical malpractice action against a hospital client. The plaintiff claimed that the nurses and other staff members failed to carry out physician orders for prophylactic anti-coagulation interventions causing her father to develop a deep venous thrombosis (DVT) which ended his life. Rodney was able to overcome gaps in the nursing notes by showing the use of the interventions by other means such as photos/video of the decedent, other parts of the chart noting measures in place and evidence of custom and practice. The case was affirmed on appeal and costs were collected.

Harris v. Hospital. In November of 2014, Rodney and Alex Bean received a defense verdict after only 36 minutes of jury deliberation in this lawsuit filed against a Southern Illinois hospital. While undergoing a radiological procedure, the plaintiff suffered an extravasation of almost 100ccs of contrast media. As a result, the plaintiff was transferred to another hospital where she underwent a fasciotomy, leaving her with a scar running from her wrist to her elbow. Plaintiff, who also claimed ongoing pain and permanent disability, incurred more than $275,000 in medical expenses.

Meyers v Doctor. In April of 2014, Rodney Sharp and Dennis Harms obtained a defense verdict on behalf of their clients, a local urologist and his employer, in this lawsuit filed in St. Louis County. The plaintiffs alleged the doctor failed to diagnose and treat a spinal lesion that caused permanent bladder and bowel incontinence and erectile dysfunction. Plaintiffs asked the jury for more than $2.7 million. The case was among the Top 15 Defense Verdicts in 2014 as Recognized by Missouri Lawyers Weekly.

McDonald v. Physician and Nurse. In November 2013, Rodney obtained a defense verdict in this wrongful death section 1983 case against a physician and a nurse who plaintiff claimed failed to appropriately treat an inmate’s asthma, causing the inmate to expire, leaving behind a young son. Plaintiff’s counsel asked the jury for $3,000,000. Rodney was able to obtain several key rulings leading up to the defense verdict, to include dismissal of the medical malpractice claims and summary judgment on the Monell claim against the medical provider’s employers.

Rung v. Hospital. Rodney obtained a defense verdict for his hospital client in this action against a hospital and a physician. The claim against the hospital centered upon the nurses’ failure to report signs and symptoms of vascular compromise following a total right knee replacement resulting in necrosis of the ankle which eventually led to a frozen ankle. Medical expenses exceeded $225,000.

Sturm v. Counselor. Rodney represented an alcohol abuse counselor accused of negligently removing a patient from psychiatric medications prescribed for her. The patient claimed to have experienced a psychotic episode requiring hospitalization and other damages as result. After a 5-day trial, a St. Louis County jury returned a verdict in favor of Rodney’s client.

Juang v. Physician and Hospital. Rodney obtained a defense verdict for a St. Louis hospital and physician in a case alleging failure to diagnose appendicitis, which resulted in multiple hospitalizations for removal of the appendix, a bowel resection and a bowl obstruction. The plaintiff, a Washington University law student, was required to miss a semester of school and accumulated $120,000 of medical bills and lost tuition. A St. Louis County jury returned a verdict in favor of all defendants.

Brown v. Physician. Rodney represented an emergency room physician who was accused of failing to diagnose a lacerated tendon in the hand which required several surgical procedures to correct. The case was tried to a defense verdict.

Crook v. Physician. Rodney represented a pulmonologist who was accused of failing to properly treat a patient who developed ARDS after falling from a roof and eventually died. Following an 11-day trial in St. Clair County, Illinois, the jury returned a verdict against the co-defendant, but in favor of Rodney’s client.

Hunt v. Physician. Rodney represented a physician who was accused of improperly treating a puncture wound in a 10 year old boy’s foot. The child subsequently developed osteomyelitis. The court directed a verdict in favor of the physician at the close of all the evidence.

Heinz v. Hospital. Rodney represented a wound care nurse charged with primary responsibility for following a Madison County, Illinois man’s surgical wounds. Despite the development of an infection, which resulted in the fusion of both of the patient’s knees, the jury returned a verdict in favor of the nurse.

Mandrell v. Physician. Rodney represented an urologist who was accused of failure to properly perform a vasectomy which resulted in the conception of a child with severe and rare congenital defects. The case was tried to a defense verdict in the United States District Court for the Southern District of Illinois.

Meury v. Hospital. Rodney represented a hospital and its employed obstetrician, anesthesiologist, and anesthetist in this case. The plaintiff was a woman who became permanently paralyzed after a cesarean section in which epidural anesthesia was administered. Although the jury could not reach a verdict at the conclusion of a lengthy trial, the matter was favorably settled shortly afterwards.

Kiersey v. Physician. Rodney tried to verdict this case in which it was claimed that his client, an orthopedic surgeon, negligently performed a hip replacement on his patient. X-rays showed that the acetabulum had been placed at a 75 degree angle rather than the customary 45 degree angle resulting in a subsequent dislocation of the hip. Rodney was able to convince the court to exclude much of the plaintiff’s damage evidence. As a result, the jury returned a verdict for $100,000, less than twice the medical expenses and far less than the amount being sought by the plaintiff’s attorney.

Given by clients and peers who have interacted with Rodney during his legal career in the area of Personal Injury Litigation – Defendants.
Legal Services of Eastern Missouri

Volunteer Lawyer of the Year Award