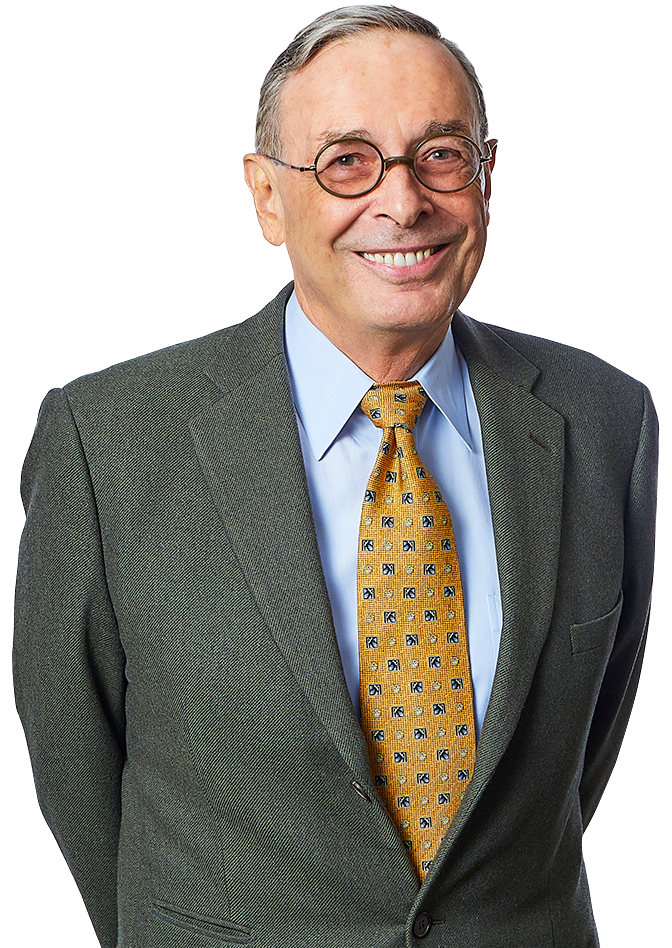 David is a well-recognized litigator in many areas to include Complex Business, Intellectual Property, Marital Dissolutions and Federal Criminal Defense.

With more than 40 years of legal experience, David Helfrey is a seasoned trial veteran who brings a vast knowledge of a variety of industries to the Business Litigation Practice Group. Prior to his role at Sandberg Phoenix, David was a partner at Helfrey, Neiers and Jones, which became a part of Sandberg Phoenix in 2013. The consummate trial lawyer, David frequently represents individuals and privately held corporations in various phases of intellectual property litigation and white collar criminal matters in both state and federal forums. He has prosecuted and defended patent and trademark infringement cases dealing with products and designs which include food ingredients and preserves, book printing processes and gasoline nozzles. David has also defended and tried a myriad of white collar criminal matters where wire fraud, mail fraud, criminal forfeiture, federal tax offenses and money laundering have been alleged.

David’s practice has taken him to federal courts from Hawaii to Puerto Rico and New York to Texas, where he has worked on behalf of white collar defendants at trial and in union and intellectual property trials. He enjoys the courtroom and is keenly interested in litigating, diving into cases head first and developing an impressive knowledge of his clients’ industries and business environment. He has even handled divorces of sports figures and celebrities.

Outside the office, David enjoys traveling, particularly to Sanya, Haian Island in China, with his wife Ruby, where they maintain a condominium on the beach. From an early age, David’s interest in China arose from a desire to experience new and different cultures and explore different ways of thinking – an approach he applies to his legal practice. In the last 15 years, David has represented several Chinese clients in cases in the United States, including the People’s Bank of China and Asian Development Bank on money laundering issues.

David began his storied career with the Judge Advocate General’s Corp in the United States Army in the capacity as defense counsel, prosecutor and special courts martial judge for East Asia. Thereafter, he served with the Strike Force against Organized Crime in the United States Department of Justice. His final prosecution with the Strike Force was the subject of the Martin Scorsese major motion picture, Casino.

Since leaving the Department of Justice, David has developed extensive experience in intellectual property litigation and white collar defense. He frequently presents seminars to various companies and governmental agencies in the People's Republic of China on corporate, banking and intellectual property matters of concern in China. David has been involved in more than 1,500 cases, including those in various Federal and State Courts throughout the United States.

Barber v. Nachital Farms and Gary Nachital. (WDMO, 2018) Cattle rustling case involving the theft of over 1800 head of Angus Cattle from Warrenburgs, Missouri to Nachital Farms in South Dakota. Case settled for more than expert would have testified on the courthouse steps just before trial was to commence.

U.S. v. DeLuna. (83-00124-10-CR-W-8) As a federal prosecutor, I was able to establish the link between the then International Brotherhood of Teamsters Union Leadership at the national and local levels who provided the backbone or skeleton for the various Mafia families located throughout the Midwest to control loans made by the Union’s Central Status Pension Health and Welfare Funds. One set of loans was used to purchase the Stardust, the Fremont, the Hacienda, and the Marina hotel/casinos. Monies were then skimmed from these casinos and distributed to the Mafia families in Kansas City, Chicago, Milwaukee and Cleveland, and Teamster Union leaders.

U.S. v. Barber. As a defense attorney, I defended a business owner who was charged in the arson of his aircraft parts business. The fire was set by two organized crime associates who both testified to setting the fire at the request of my client. I directly challenged the Government’s case; attacked the favorable “deals” to the arsonists; and, asserted it was a “shake-down” by the Mafia soldiers and was not ordered by my client. The client was found not guilty.

U.S. v. Fisher. (93CR-246) In another criminal case, the owner of an automobile dealership was charged with fraud in relation to inventory loans on automobiles financed by the bank, lying to the Grand Jury, obstruction of justice by not complying with a subpoena and bankruptcy fraud. By directly challenging the Government’s case, it’s overcharging, and asserting the bank’s knowledge of the cars being out of trust, the jury found the owner not guilty.

Husky Corporation v. Catlow, Inc. (4:97-CV-01475) Our client sued another gasoline nozzle manufacturer for patent infringement. There was a long standing rivalry between the companies. The jury found in favor of our client so quickly that we didn’t have time to assemble the exhibits for them.

Federal Trade Commission v. Commerce Planet. (09-01324-CJC) We were able to fashion a favorable relationship with the FTC providing them full cooperation and testimony resulting in a settlement of the demands of the FTC for $100,000. While the company was our client, the president was new to the company and the conduct complained of was prior to him becoming the CEO. A former president and other executives were found liable and/or paid in excess of $20,000,000 to resolve the FTC demand against them for engaging in deceptive practices in the sales over the internet.

California Flight Academy International v. Harbin Flying Dragon Flight Academy. (37-2010-00071049) A flight academy in California sued a Chinese client claiming the lack of payment for the training of Chinese pilots. The matter ultimately settled on what the client considered to be very favorable terms."

One Queenridge Place Board of Directors in Las Vegas, Nevada, Re-elected President of the Homeowner’s Association

United States Court of Appeals for the District of Columbia

United States Court of Appeals for the Federal Circuit

United States Court of Appeals for the Fourth Circuit

United States Court of Appeals for the Tenth Circuit

United States District Court for the Eastern District of Michigan

United States District Court for the Western District of Michigan

Co-author, "Equal Access to Air Transportation: The Only Way to Fly," Law and Inequality, Volume III (1990)

2020
Best of the Best Attorneys