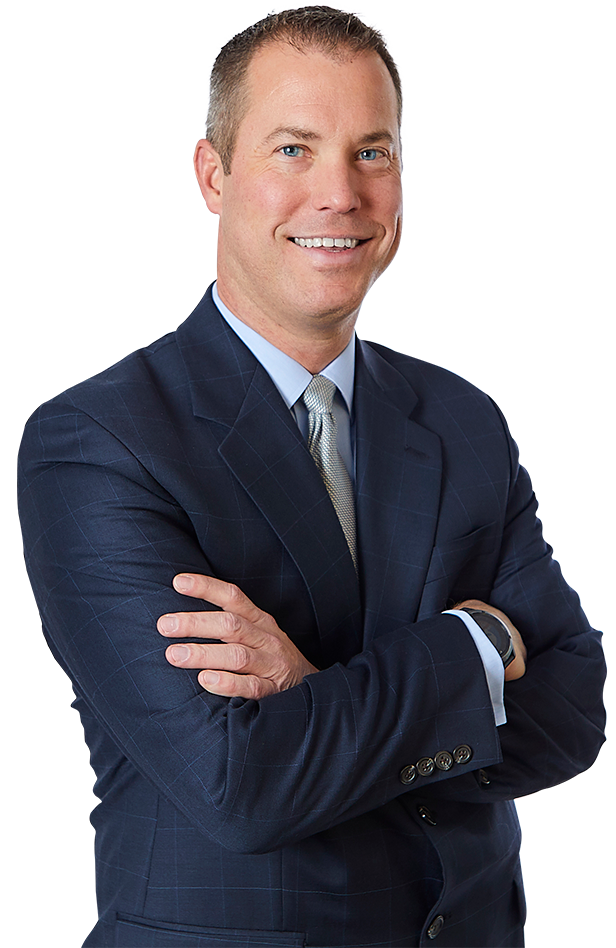 Philip Lading is a shareholder and primarily practices in the firm’s Business and Business Litigation practice groups. Phil has extensive experience in municipal law and governmental relations, business and commercial litigation, insurance defense litigation and insurance coverage disputes. He also serves as an Assistant State’s Attorney in Effingham and Madison County, City Attorney for Staunton, Illinois and the Village Attorney for Hamel and Roxana, Illinois.

Baker v. Stiverson. In a unanimous decision from the Illinois Appellate Court for the Fifth District, the defense verdict obtained by the firm in an excessive force case was successfully affirmed. The case involved complicated issues related to what constitutes judicial admissions for purposes of trial, and also excessive force in the context of use of a taser by a law enforcement officer. The firm further successfully argued for and were validated by the appellate court in its decision that an “abuse of discretion” standard applied, as opposed to a “de novo” standard on appeal requested by the Plaintiff.

Dominic Choate v. Indiana Harbor Belt Railroad Company. A monumental decision involving premises liability claims, this opinion of the Illinois Supreme Court reversed a body of existing case law. Philip Lading and two other Sandberg Phoenix attorneys were brought in by the Illinois Civil Justice League, the Washington Legal Foundation, and the Allied Educational Foundation to assist with amicus curiae briefing on appeal. The Supreme Court’s decision centered upon the ability of a child to appreciate the risk and danger of a moving train, and established a precedent for future cases involving the risks of trespassing children and the expense of remediating dangerous conditions.

Smith-Silk v. Nelson, et al. In a class action lawsuit filed in St. Clair County, Illinois, plaintiffs challenged the constitutionality of a “Neutral Site Fee” approved by the Illinois Legislature and imposed by Madison and St. Clair counties. At issue was the constitutionality of the law authorizing counties to impose a fee on all civil lawsuit filings fund a neutral site custody exchange where parents could safely exchange physical custody of their minor children. After oral arguments, the court granted Madison County’s Motion to Dismiss, upholding the constitutionality of the legislation, and entering judgment in favor of the Madison and St. Clair Counties. The decision of the trial court was successfully defended by the firm in the Illinois Appellate Court Fifth District.

Hutson v. Rice. This case involved a lawsuit against the Madison County Recorder wherein the Plaintiff alleged retaliatory discharge in connection with her separation from employment. After some early briefing and motion practice by Madison County, the lawsuit was voluntarily dismissed by the Plaintiff.

Barrett v. Hirsch. Philip and other Sandberg Phoenix attorneys fought a complicated child custody case in Madison County, Illinois, where multi-state jurisdictional issues were present. After winning a temporary child custody order for our client, the decision was appealed to the Fifth District Appellate Court in Illinois, who affirmed the decision of the Circuit Court. Opposing party’s attempt to seek a writ of certiorari in the Illinois Supreme Court was denied.

Mark Hale et al. v. State Farm Mutual Automobile Insurance Company et al. A team of Sandberg Phoenix attorneys represented Citizens for Karmeier, a political committee supporting the election of Justice Lloyd Karmeier to the Illinois Supreme Court in an alleged federal RICO violation. Filed in the Federal Court in the Southern District of Illinois, the plaintiffs alleged that Citizens for Karmeier was advocating on behalf of State Farm in order to fund the campaign of Justice Karmeier. Sandberg Phoenix was able to obtain a voluntary dismissal of the portion of the lawsuit directed at Citizens for Karmeier.

Bazzell v. MN Hospitality, Inc. Circuit Court of Madison County, Illinois. Phil obtained a defense verdict after a week jury trial, and two-hours of deliberation. A 25-year old man was shot by a motel guest, and rendered a paraplegic. Plaintiff claimed the defendant failed to protect him from the foreseeable criminal acts of the shooter.

Handshy v. Macklin. Circuit Court of Effingham County, Illinois. Phil received a jury verdict in favor of his client and against a tavern that over-served a patron who left the bar and caused an auto accident. Verdict of jury affirmed during successful defense of appeal by the defendant.

Tuggle v. Peters. Circuit Court of St. Clair County, Illinois. Phil obtained summary judgment on behalf of the client, a defendant in an auto accident lawsuit, on the issue of liability.

Phil formerly served on both the Illinois State Bar Association’s Insurance Law Section Counsel and Bench & Bar Section Counsel. He is a member of the Edwardsville Gun Club, the oldest continuously operational gun club in the United States.

Phil works closely with H.I.S. K.I.D.S., Inc., a local non-for-profit charitable organization based out of Highland, Illinois, whose mission is to serve children and their families who are dealing with cancer and other terminal illnesses.

Phil formerly served on the Board of Directors for the Edwardsville/Glen Carbon Chamber of Commerce and the Greater Edwardsville Area Community Foundation.

Co-Author, "FMLA, ADA, Military and Other Leave Issues: A Guide for the Illinois Employer," Illinois Chamber of Commerce (2011)

A recognition for Phil's work within his field as well as within the community at large.
2008
Illinois Business Journal

This recognition applauds a class of young professionals who live and work in Southwestern Illinois and are leaders in the region, contributing in innovative ways through their profession and charitable efforts in their communities.
2005
Southwestern Madison County Chamber of Commerce